You Can't Take A Baby

A Mum and Two Kids Take on the World

If you like drinking tea from a bowl surrounded by mountains, horses and alpine flowers, Kyrgyzstan is a dream destination. A land of warm hearts, soaring skies and dodgy toilets, Kyrgyzstan is bliss on horseback. 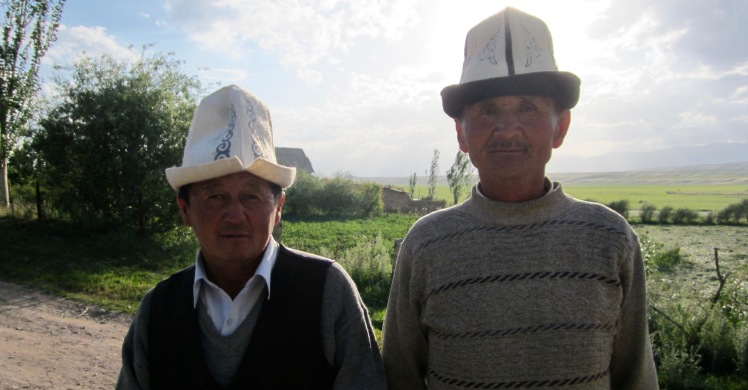 Kind, kind people, with soft hearts and strong physiques. In the summer, doctors and teachers decamp to their yurt in the mountains, mark off paths to their front doors with white stones and drink tea.

A turquoise lake high up in the mountains. Water, horses, cows, sky, flowers, yurts, pebbles, lady birds and the occasional mausoleum. The kids made a ladybug hotel on the shore. We rode horses and drank tea and enjoyed being alive. Bleak in the rain. Glorious in the sunshine.

Lake Issyk Kol is ringed by long grass, occasional yurts and mountains. In July, with snow on the mountains, the lake was smoothly cold, unbroken by ripples. It was like swimming in the world’s most perfect infinity pool. Afterwards, we changed behind the car door and drove to our evening’s lodgings – a yurt at the back of a tin-roofed house. Our hostess lived there with her daughter in summer; then returned to her husband in the city for winter. 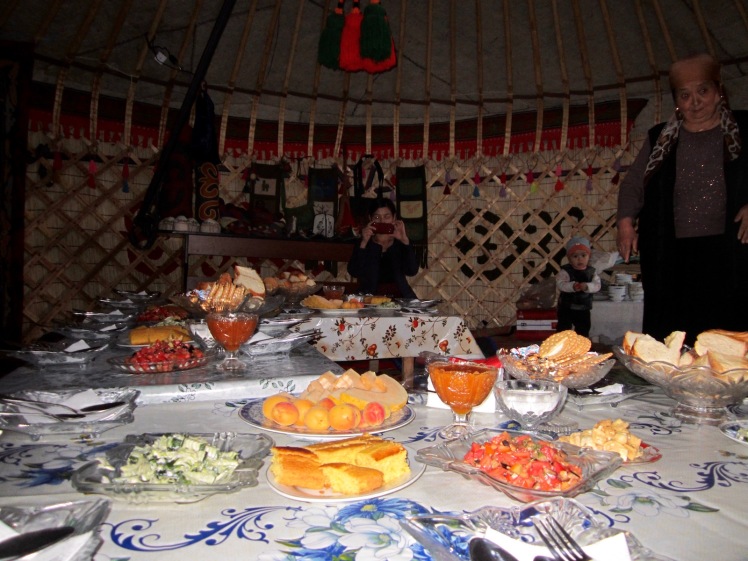 It was the last night of Eid and an old school friend of hers came across, with her extended family, for a feast. She invited us to join them and we sat cross-legged, gorging ourselves on salads, bread, cakes, soup and sweets. Blissful.

The yurts are made from sheep’s wool. When skies are clear and warm(ish), the tops can be peeled back to reveal the stars. Wood burners sear the cold, night air. Like princesses and the pea(s), we slept on piles of mats, under piles of blankets. The bathroom was a free-standing dresser and kettle of warm water.

At yurts, petrol stations or places without much plumbing, a kettle waits outside the bathroom. To wash, we’d crouch down; I’d squeeze out shower gel and we’d pour kettle water on each other’s hands. Kettles were more fun than taps. I miss them.

The two main types of tea are black tea and green tea. Both tasted amazing but we usually chose black. At home, I ignore tea. In the mountains, nothing tasted more refreshing than endless bowls of black tea. Even Alicante took to it. It warmed your hands and soul and washed the dry bread down. The locals only half fill your cup when they want you to stay, so they can refill it many times. Drinking tea was sociable, heartfelt and thirst quenching. You can’t beat a lovely cup of char. 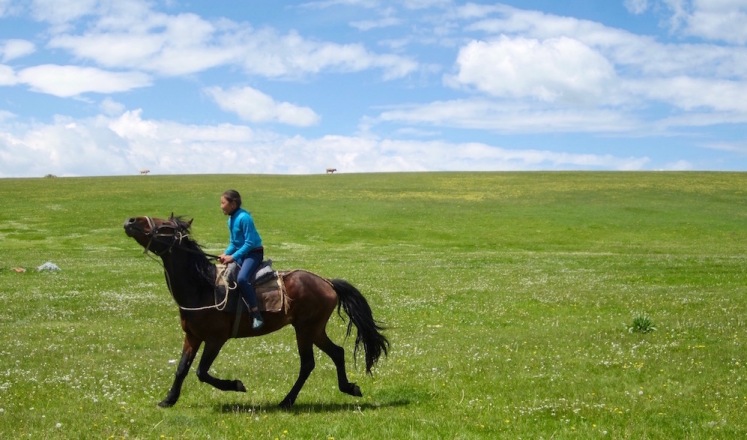 Horseback’s a popular mode of transport in the countryside. Local kids are skilled riders.  We’re not, but lack of finesse didn’t stop us trotting alongside Lake Song Kol, or uphill into the mountains. Sahara loved having her own horse. It was better than a bike, liberating and high up. The day passes at horse pace, trotting around looking for grass. It’s a good speed to travel at – fast enough to see the area, slow enough to breathe the day in. 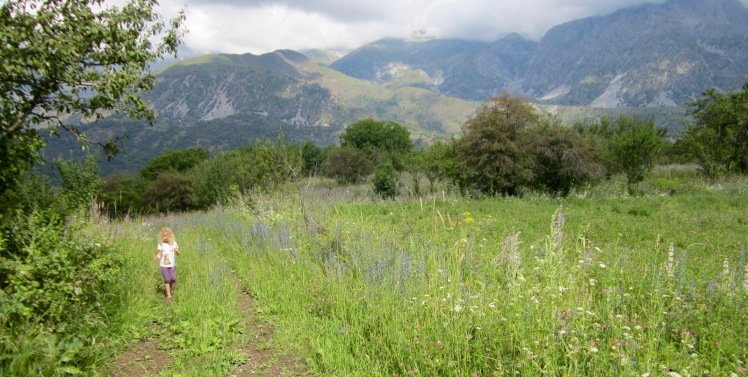 Arslanbob is home to the world’s largest walnut forest. We hadn’t been to a walnut forest before so we wanted to go. Between walnut trees, flowers ran across fields, and mountains dropped into a valley that looked like Switzerland. Hiring a local guide means money goes back into the local community. Our guide told us that locals climb the trees and shake the branches to harvest valuable nuts. Men die and injure themselves falling from the high trees. Most of the villagers are Uzbek because the Soviet regime imposed borders across the region, regardless of ethnicity. Our Kyrgyz driver hadn’t been before but said he’d come back with his wife. 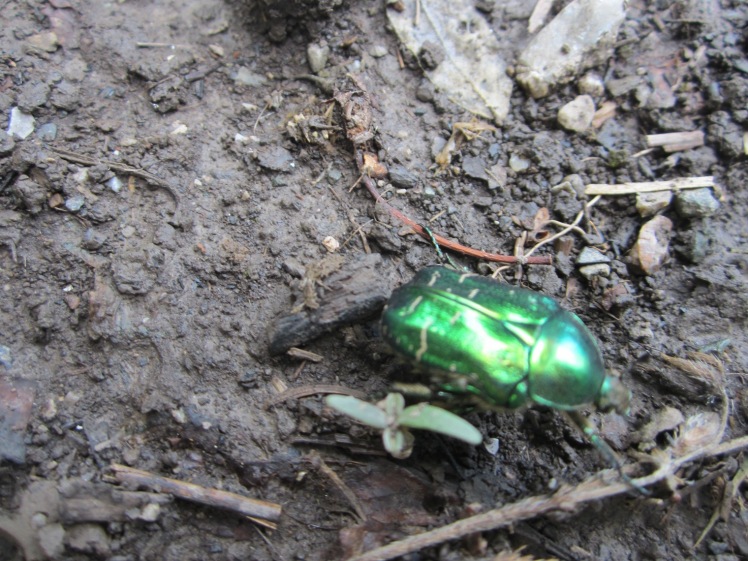 The kids found a luminous green beetle on the ground. We were very impressed with its shiny shell.

Summer is short in Kyrgyzstan’s mountains – end of June, July, August – and that’s pretty much it. Alpine flowers have to act quickly. Across plains, they unfurl like a dancing, joyful carpet: pink, yellow, blue, white, purple. Fluttering with colour, they tiptoe down mountainsides into valleys. Sahara and I sang Ali Bali Bee, as we ran downhill from Lake Song Kol. It was like a scene from Heidi. The flowers made us feel really, really happy. 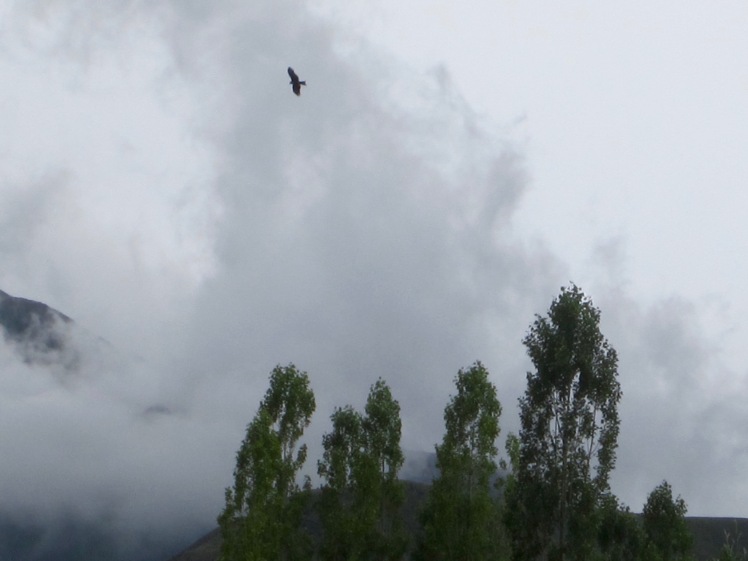 Rocks and rubble slide from the mountains’ haunches on to the wavy, valley road. It feels a little tentative. Then the river washes you up at the oasis of Kyzyl-Oi. And time turns still. Locals trundle by on foot or bike or train. Mountains soar into the sky, nudging the river with their feet. Keep looking up and you’ll see eagles launched from behind the peaks, catch a thermal and glide above the valley searching for food. Their flight’s effortless, majestic. Our driver told us they’ll take deer or small dogs. From the ground, they don’t look big enough, only mesmerisingly suited to the skies.

In the country, toilets are planked wooden cubicles with a hole between boards. Most are pretty clean, with toilet paper, but they’re all a bit smelly because there’s no drainage. The kids weren’t keen on the drops but they got the hang of them. The worst one we used had giant, poo-chomping maggots swimming in a pool of excrement below. It was so stinky, I left the door open and watched horses eating grass to distract from the unsavoury ambience. Luckily, that toilet had no roof so rain could rinse the wooden planks. In hostels, there were flushing toilets which felt luxurious.

In Bishkel, kiosks of money changers are grouped together around the intersection of Sovietskaya and Moskovskaya. It was easy to change US dollars or Euros, and possible to change UK pounds. You can often pay for accommodation and tours in dollars, but using local currency can be better value. Definitely bring some cash because cards aren’t widely used, except in expensive places.

In high mountains, the water’s quite safe – although we stuck to tea or boiled water. In the cities, it really isn’t. Be careful about eating washed salad.

To see the country, it’s easier to hire a driver, hitch lifts or cycle. Buses run between the cities. Taxis are cheap.

It was easy to get visas on arrival at the Kazak/Kyrgyz border, between Almaty and Bishkek.

The Tajik border’s trickier to get to – a long bus journey from Bishkek. It’s easier with a driver. The border itself was straightforward (although we’d organised visas in the UK).

How We Got There

We took a mini-bus from Almaty Bus Station. It left about 7.30am so we had to take a taxi to the bus station and buy tickets there on the day. There’s only a break at a service station and one stop at the border. Then the  bus carries on, with a depleted number of passengers, to Bishkek’s bus station. You unload everything at the border and carry it, in the searing heat, to the other side. Bring water and snacks.

We organised a tailormade tour through Aigul, the manager at Apple Hostel in Bishkek. She was incredibly kind and helpful, arranging a lovely driver, Baket, to take us round the country. She also put me in touch with a good tour operator in Tajikistan. Apple Hostel is next to the bus station in Bishkek so it’s a good starting point if you’ve just arrived and need information. There’s also a cafe there.